The Unofficial History of BBQ 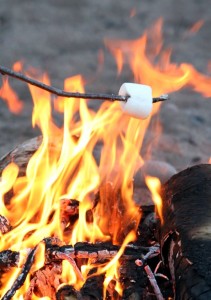 The chill autumn air around us, a blanket of stars above our heads, and marshmallows roasting near a warm, crackling campfire. If this scene doesn’t bring back memories of a camping trip to the forest, or a fire-pit in a backyard, your status as “human” is in question.

We all know that, since the very beginning, fire kept the night at bay and allowed human-folk the chance to rest a little easier, at night. If you’ve ever sat by a fire and noticed that your mood began to lighten, or your stress levels started to decline, it isn’t just in your head. There is scientific evidence that shows those effects to be real, and a growing body of research trying to discover exactly why. 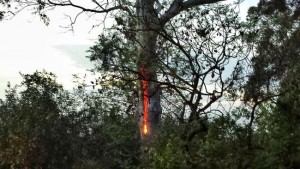 Nature made fire, long before we knew how.

Archaeologists currently believe that humans used fire long before we knew how to start them. Meaning that maintaining the fire would have been a community event, with significant importance during the colder months. The current scientific theory is that this happend for such a long time in our shared human history, that as a species, we have developed a chemical response to fire, learned over many generations. While that is still being researched, we know the effects include lower stress levels, higher relaxation chemicals and a release of chemicals that foster community and social bonding. 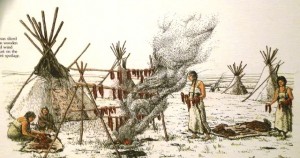 On the Northern Plains, Indian nations such as the Blackfoot would place thin strips of buffalo meat on racks over a smoky fire to let the smoke cure and preserve the meat.

Shortly after we discovered that fire was good for keeping other predators at bay, and not turning into neolithic popsicles, we also discovered that dehydration, and the antibacterial properties of phenols and other chemicals in the absorbed smoke, kept meat and fish from going bad. This allowed the excess from a bountiful harvest to be stored for later consumption, which led to a better chance of not starving to death in the cold. While difficult to appreciate now, before there was electricity and refrigeration, there was a very real chance of starving to death before spring.
While the knowledge of smoking and curing meat didn’t guarantee survival, we couldn’t have survived as a species without it.

Fast forward to today, and we can see the cultural roots of BBQ in every major city of the country. Much like our ancient ancestors, BBQ is a meal shared between friends and family. We gather together to share stories, tell jokes, and laugh. Some group up near the BBQ pit to discuss various methods and help keep the fire going, while everyone makes ready for a feast. That smell triggers a primal response that helps us stay calm and strengthen bonds with one another.

It’s this deep personal tie to BBQ, perhaps, that causes such a strong allegiance to our preferred styles. To fans of vinegar-heavy North Carolina style, a tomato-based Memphis style is nearly an offensive suggestion. In Texas, people have argued long into the night over the virtues of brine vs. dry-rub. And here in Richmond, where each BBQ style can be found easily, the arguement of who has the “best” barbecue in town is really a discussion of who likes what particular style the most.

No matter what style of BBQ you are into, being passionate about it is a genetic imperitive, nearly as ancient as fire, itself!

Next: “Why is Smoke Essential?“